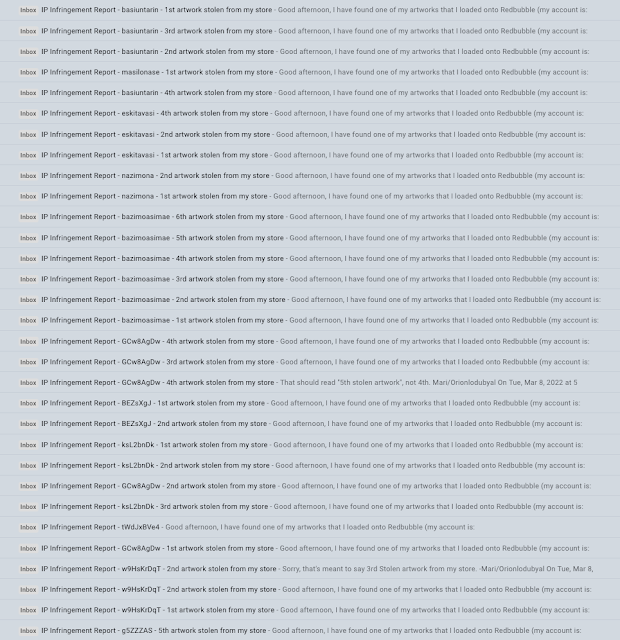 I've been a bit quiet lately trying to handle a bit of an art business crisis. Every month I have a process where I search for my artworks across platforms to see if anyone is uploading art images stolen from my social media pages or worse, from the stores my artwork is sold on. And every month I have a handful - usually between 5 and 10. Sadly, that's the nature of the business.

On February 28th, I found 52 of my artworks taken from Teepublic (I format specifically for that store, so they were easy to identify) and loaded onto Redbubble stores.
On March 1st, I found 11 more.
On March 5th, 13 more.
On March 9th, 32 more. This time with artwork I had only uploaded in the last 2 days.
Every few days I find between 10-20 more.
I notified Teepublic that it looked like their site had been scraped (bots ripping images from the site - images that had no watermark but still had signatures still intact.) I told them whatever the exposure was, it was still exposed two days previously. I started sending takedown requests to Redbubble.
Teepublic, at first, gave me the runaround, denying that anything had happened on their end. After a phone meeting with a representative from the site, I got a vague admission that they were looking into some possibilities of something happening.
Meanwhile, Redbubble started taking down the stolen artwork - usually within 24 hours, After a week of this, I noticed they started just shutting down the stores wholesale, for which I was immensely grateful. But, I reminded Teepublic, until they handle whatever the exposure was on their end, this is just going to keep happening.
As of this morning, I found another 11. However none of the artwork was new - still artworks from the old batch. I'm probably going to have to monitor this for months. Maybe indefinitely. Every single morning. My images, along with dozens of other artists, are out there in some database getting loaded onto stores. That's not going away any time soon.
Meanwhile I'm working with the other artists whose artwork I was able to identify and were looking out for each other. We have a kind of round-robin where we alert each other when we see each other's artwork in these thieves' stores. They seem to rip us off in batches.
The worst realization for me was after the bulk of the stolen artwork had been taken down in the first round, my art sales bounced up, and have stayed up a little. I had been tearing my hair out wondering why my sales had dropped so dramatically and stayed down even though I was loading more art than before, of higher quality than I had loaded before. I was loading what I knew my followers were asking for. And yet . . . No sales.
I reached out to followers I knew were looking for my art updates. They had bought my art. But not from my store. As a result, the product they got was very poor print quality. They got their money back thankfully, but those are only the people I knew about. I wonder how many others have bought what they thought was art from my store, but now think I sell low quality images because they item they received was a low resolution rip.
This whole problem leaves me so disheartened. I spend a couple of hours every day searching for my art and sending takedown requests. That's time and energy away from creating art, away from creating updates here and on Ko-fi, away from taking on more commissions, away from everything. Putting out fires. I'm not the only and that makes it worse.
So for all of you who so generously support independent artists on Print on Demand platforms, just a warning to make sure that the store name matches the artist whose work you're looking at. If you see artwork turning up somewhere it shouldn't, and you have the time, please alert the artist if you can. If you do end up with artwork of low quality, let the store know and let the artist know. It's the only way we'll be able to get ahead of this, if there is any way to do that at all.
Thank you as always for your support and encouragement.
Mari / Orionlodubyal

One of the abstract Obsidian Order (commissioned) pieces CBS approved on RedBubble.   Another commissioned set of designs approved by CBS this week.   I finally have a handful of artwork that's been approved by CBS for sale on RedBubble! It only took 6 months, but at least now I have a better understanding of what they're looking for, and what they're rejecting. What follows is only slightly above hearsay but it's what I've learned from other Star Trek artists and from representatives at RedBubble and TeePublic (which have now merged.)   I only recently found out a lot of this stuff when RedBubble and TeePublic joined forces. TeePublic reached out to me upload my fanart over there and I asked them what the brands, particularly CBS/Star Trek was looking for. The rep actually gave me some really helpful info that isn't on the Brand Partnership page. Here's the TL;DR if you don't want to read the whole thing: Avoid actors' face
2 comments
Read more