I finally have a handful of artwork that's been approved by CBS for sale on RedBubble! It only took 6 months, but at least now I have a better understanding of what they're looking for, and what they're rejecting. What follows is only slightly above hearsay but it's what I've learned from other Star Trek artists and from representatives at RedBubble and TeePublic (which have now merged.)
I only recently found out a lot of this stuff when RedBubble and TeePublic joined forces. TeePublic reached out to me upload my fanart over there and I asked them what the brands, particularly CBS/Star Trek was looking for. The rep actually gave me some really helpful info that isn't on the Brand Partnership page.

Here's the TL;DR if you don't want to read the whole thing:

1. Saleable vs Licensed: First know that there is a difference between being allowed to sell your Star Trek fanart on a platform, and being licensed by the brand. My stuff is allowed - not licensed by Star Trek. CBS isn't promoting my work, using my art or anything - they just said it's ok to sell it. That's good enough for me. The art that gets licensed tends to be far superior to what I can do at this point in my art career. Plus, I'm very niche. I like my Garashir, Spirk and Orions and frankly that stuff doesn't really sell for them. Which take me to . .

2, Brand 's Self Image: Know what the brand thinks of itself. Star Trek sees itself as very optimistic, uplifting and forward-looking. They tend to want art that makes people feel good, or at least no feel bad. They feel strongest about promoting the "Core Brand" - Classic Trek, and whatever is currently airing and coming up. So think Discovery, Picard, Lower Decks etc. That kind of (free) promotion is good for their brand.  And they don't care for controversy. Star Trek as a brand icon has always been willing to take risks. CBS/Paramount don't really share that enthusiasm.

3. Avoid faces of actors. When you use the actors' faces, you not only have to get CBS's permission, but then the talent agency/representative permission. That takes ages and ages. Just avoid it if you can.  That said . . .

4. Babies and Animals: Stylized, chibi or animal versions of characters actually have a good chance. Baby trek, Trek cast as puppies, whatever - that sort of thing, especially if it's cute and/or funny, has a really good chance.

5. Originality: Come up with stuff that hasn't already been done a million times. Facepalming Picard and stuff like that is starting to get rejected just because there is so much of it, and they want to move forward with Picard.
Speaking of stuff that's getting hard to get approved - Gorn, apparently. I heard from a couple of artists that their Gorn art, unless it was baby Gorn, or some other very stylized and different version of Gorn, was having a hard time getting through. Mine was no exception. My Gorn to be Wild artwork was rejected. :-(  Which is why I recommend looking forward, not backward . . . 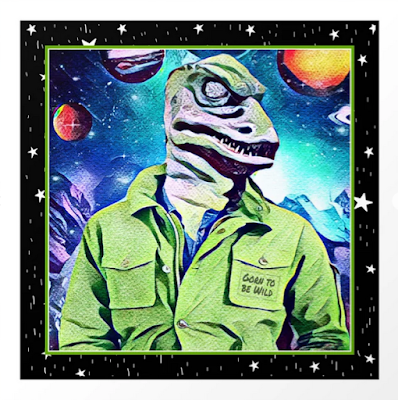 6. Look ahead: Think about what the characters and themes that are coming back for Picard - those probably have a good chance. Remember, getting Jeri Ryan's face on a mug probably won't work, but her ocular implant is recognizable on its own and can be used in something more stylized.

I hope that helps. Anyone with suggestions, stories of successes or rejections you'd like to share -- please jump on!

I've been a bit quiet lately trying to handle a bit of an art business crisis. Every month I have a process where I search for my artworks across platforms to see if anyone is uploading art images stolen from my social media pages or worse, from the stores my artwork is sold on. And every month I have a handful - usually between 5 and 10. Sadly, that's the nature of the business. On February 28th, I found 52 of my artworks taken from Teepublic (I format specifically for that store, so they were easy to identify) and loaded onto Redbubble stores. On March 1st, I found 11 more. On March 5th, 13 more. On March 9th, 32 more. This time with artwork I had only uploaded in the last 2 days. Every few days I find between 10-20 more. I notified Teepublic that it looked like their site had been scraped (bots ripping images from the site - images that had no watermark but still had signatures still intact.) I told them whatever the exposure was, it was still exposed two days previously.
Post a Comment
Read more